At the threshold of a new beginning

To commemorate all this fun,

I'm going to try and venture

into a new type of writing future -

involving some prose and

to add some more detail

to my wordy cocktail.

I am eager to discover

how this will challenge me as a writer;

So I invite you to join me

as I continue to adventure...just me and my soliloquy!


The Art of Making Sushi

He wrapped the flimsy bamboo lining around the roll. It was snug, as it should be, clutching the roll and stifling it into shape. The rice molded itself into a straight line taking orders from the lightweight but strong lining. He could still feel every bit of the insides through all the layers on the outside. The pulpy rich avocado overwhelming in its buttery taste. The crunchy wet cucumber with juicy slippery seeds. And the shy but strong sesame seeds uniting crunch and mush together. He thought for a moment if this roll really did represent his dying marriage like Elvyn had shouted at him as he shook his head in shame at his sad appearance that morning. His husband had been so dejected and filled with disappointment at his sushi-rolling self that Elvyn couldn't even muster the anger to slam their bedroom door as he hurried out of their welcoming yet cold apartment. Maybe his own bipolar existence had transferred to their home? He dipped the roll in the yellowing tupperware labeled "Crispies" and repeated the ritual with the bamboo lining. Maybe if he could create the perfect roll, he could fix his marriage. Where could he find the sesame seeds needed to bind his mushy Elvin to his hardened self? "Egan! How're we doing on that av-cuke roll?" He reached for the foot-long knife dunked its head in the tub of old water, smacked off the excess droplets, and sliced through the roll with precision, defeat, and sadness. There's no such thing as a perfect roll. "One avocado-cucumber roll coming up!" 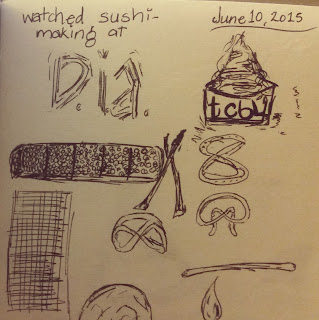