Today was our second day in Barcelona. We spent the day visiting all of the wonderful architecture designed by Gaudi (or as we both though - Gaudy). It was interesting when we first walked into Sagrada Familia, it seemed completely overwhelming, and it was hard to think of what inspired the person who designed it. But after going through the museum and seeing all of the extremely creative ways that Gaudi used geometry and how he created such a complex design, I had much greater appreciation for his work. I guess that goes to show it's best not to judge something too quickly, because first impressions can be misleading. We also visited Parc Guell which was nice, but honestly, after Sagrada Familia was rather disappointing. But the view from up top of the park was beautiful.

The last two days were TOO hot. I haven't written it on the blog yet, but we've shared it with each other in person many times. The most frustrating thing about traveling in Europe is that nobody wants to give you water and it's often difficult to find bathrooms. Between these two combinations it is WAY too easy to get dehydrated, especially when it is as hot as it has been the last two days. That makes the travel much more difficult and exhausting than it needs to be. Water and a place to pee are basic human needs, telling me that your tap water is "not good" is just obnoxious. I've come to appreciate a good beer more than ever this trip, but that doesn't mean I can just do a ctrl+F and replace water out of my life with beer. Right?

One other thought for the day - what does it mean to be a tourist and what does it mean to experience something? Is it just a checklist? I know that sometimes when I get into navigation mode I just start trying to take us to all of the sites and forget to just be there. I wonder how much other people do the same. When I just stopped to watch people, I couldn't help but be struck by how much the whole experience becomes about taking pictures. At each little landmark you see a person taking their time to take a picture, and then the next person rushes in for their turn. Or the folks who were taking selfies, and spending 15 minutes fixing their hair, pouting their lips, or sticking their butt out at the right angle (Would Gaudi appreciate this math??? Get it???). Not to judge these particular people, but it's an interesting culture and world we live in that creates this. I know we want to hold on to these experiences, but they are also ephemeral, as is life. 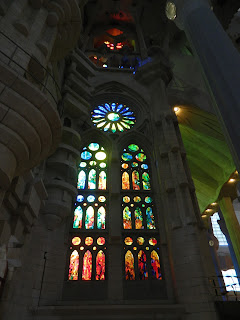 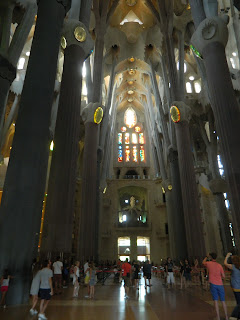