Where (and when) to begin?

This was our first day in Barcelona. I would never have imagined that every day could be so new and so amazing, but our trip continues to be that way. By serendipity, once again, we got to meet an old friend of yours - Shruti, and her partner Dan. Desi girl + white guy named Dan = good combination. :-) Don't you think?

So the four of us got out bright and early at 9:00am, on a Tuesday, and the entire city was dead! All of the shops were shut and nobody was out. After lots of walking through the silent (but beautiful) streets, Shruti and Dan took us to a nice cafe called milk. We had a delicious breakfast, and quite good company. It seemed clear that this cafe catered to tourists, well, because: (1) it was actually open, (2) all of the menus were in full English, and (3) only tourists were there. That's okay, because in this case it was exactly what this group of tourists needed.

The streets of Barcelona were remarkable. My favorite thing to do in a new city is just walk around and explore what everything looks like, and we got to do just that! We visited two giant and amazing markets (mercado de boqueria and mercat de Santa Catarina) thanks to Ridhi's suggestions. The labyrinthine gothic quarter was filled with hidden gems around every turn. And there was shop after shop after shop. I know they were very exciting for you, and sorry for getting impatient with all it; I wanted to "go go go" and make sure that I could keep seeing new things at every turn. Patience is a virtue, I suppose.

By midday the heat was sweltering, and I think we were both feeling the effects of it. I can definitely see why an afternoon siesta is required! (or as Pooh would say - PLZ CNOK IF FIESTA REQID). So I'm glad that we did that - even if we didn't start until the evening.

The place we are staying is right on an entire street of tapas bars. I would never imagined that a single street could have, say 100 tapas restaurants within 100 meters of each other (I don't even think this is hyperbole). It was fun walking around somewhat cluelessly as we didn't really know the language or the system, but I guess even in Spain people mistake you as a Latina, which seemed to help us get a table and get moving along (and that feigned confidence was useful too!). The food was great, and the portions were considerably larger and cheaper than in the US. And how fun is it to be able to walk the streets (safely) at midnight? I still can't wrap my head around that; even as we walked through the gothic quarter, something in my gut told me we were in alleys and needed to "get the heck out," but it wasn't like being back in the US.

Even though we tried to sleep around midnight, we could still hear people skateboarding outside at around 1:00, and other general ruckus. So when should someone start the day? Does it matter? It was fun to experience things differently. :-) And tomorrow will be a day for architecture. 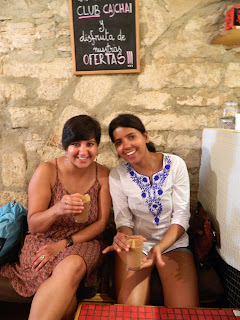 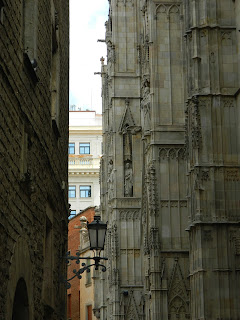 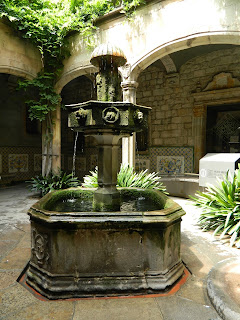