Letters to Tomorrow ~ Beep This

Today, Dan and I listened to a fascinating podcast about how we learn to speak, listen, and develop language in the womb - not just when we are first spoken to, utter our first words, or learn to speak another language at 20 because you want to talk to the woman you love in Hindi (ask Dan to tell you that story someday).

So we wondered what we would say to you, how we would talk to you, which words in which languages would we use when you go from zygote to fetus. I also wondered which songs I would sing to you, play for you, and dance with you to. Today, I want to write to you about songs and their power.

I never sang out loud growing up. I was too shy and too worried about how my voice sounded in my own head. The first time Dan drove me in the winter of 2006 from Windsor to Denver, he put on some loud music. It may have been Cold or Rise Against or Shinedown. I don't remember. I do however remember watching him as his mouth stretched open and his eyes shut closed (Danny, drive with your eyes closed...) as he sang, no - shouted - the lyrics of the songs being played out of his old mp3 player (iRiver!). It was the first time I had seen anyone sing, rejoice, and celebrate music so unabashedly. I loved watching Dan and I still sometimes smile and watch him when he gets into a song.

Another reason I didn't sing out loud was because I have to work very hard to focus on lyrics and then recall them. I can sing almost any Beatles song - because I've heard them at least a hundred thousand times. But Dan (and his brothers) have an uncanny ability to remember lyrics after just a couple times of listening to a song. The fact that I am not a native American-English speaker compounds not fully understanding lyrics of songs. Almost all the songs I like - I like because they hold special meaning, bring back special memories, have my favorite chord progression, and most importantly - because I can dance to them. For me, music was made to move to. If I can't move physically in a space, I move in my head.

When I was a teenager, I began listening to Eminem. This was uncommon for an Indian teenage girl during that time. I met my best friend and bonded over Eminem, which was also rare. I listened to his words with care. Armed with a pencil, scraps of paper, too much time for my own good, a cassette of The Slim Shady LP, and my trusty walkman (yes!) - I would attempt to parse his syllables and try to understand his anger. He had so much anger! I guess, I could relate to him even if bizarrely. I would listen to him spit madly about wanting to kill his wife, line people up and shoot them, shoot up every possible drug into his body, watch people writhe as they overdosed on drugs - and in some cryptic way, it helped me face my anger and channel it in my bedroom as I listened to his music.

By the time I was in my mid-20's, I had lived in the US for a while (read - American accents became a little easier for me to decode) and occasionally a new Eminem song would come on the radio. The angry teenager in me would reminisce with nostalgia. The woman in me would shudder at his rage. How could he lose his breath over rapping about killing his wife? How could I have listened to this? How could I have enjoyed it?

Over time, my filter became sharper. I had trouble listening to a lot of popular music. I struggled to confront that I really did enjoy dancing to a song and then I actually hear that 3OH!3 is telling me to never trust a ho and to shut my lips and do the Helen Keller. Or I hear the Pussycat Dolls confusing little girls everywhere:

"Do you know that no
Don't mean yes, it means no
So just hold up, wait a minute
Let me put my two cents in it
One, just be patient
Don't be rushing
Like you're anxious
And two, you're just too aggressive
Tryin' to get your (Ahh)"

And then will.i.am (please don't put punctuation marks in your name : ) goes ahead and confuses little boys everywhere: 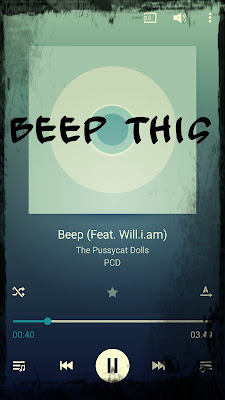 Actually, not all men only think about a woman's body. Not all women and men trivialize a woman's intelligence and heart, and commodify women's bodies. And yes, there is a pain in looking at a woman's body when she clearly doesn't want it. She's clearly saying no and has established that he's being too aggressive. I wish I could say that these lyrics represent a minority in the music industry. I wish you were going to be a part of a world where people didn't pay money to listen to artists being misogynistic, racist, sexist, violent, ageist, and ableist. But that is not the world we live in now. I hope it can be though.

So those are some of my hopes for music for the future. Other types of media...another day, another letter.

I don't know if not listening to violent music is enough though. I think more artists that live the values of justice and empowerment they sing about need to be heard and promoted.

And I cannot wait to play, sing, and dance to lots and lots of Anti-Flag as you grow inside and outside of us.