Letters to Tomorrow ~ The burden of guessing

She felt her voice shake a little. She had pulled up the lyrics in front of her. She had practiced only quarter of a time; funny - given how nervous she was. She wanted to impress him. She wanted him to not laugh at her. She wanted to make it through without sounding too high pitched (something she was very conscious about). She knew she wasn't a remarkable singer. But she meant every word of the song. And she wanted him to know that.

She got her microphone ready on her 2005 headset that was made for call-center employees and not meant for telling the boy across the world that she guessed he was the only one. She giggled nervously and then switched all too soon to business-like curtness. She wouldn't let her heart get ahead of her. She knew theirs was an online tryst too impossible to come to life. She knew that in a few weeks...months...some time, he would be a Voice far away Over Internet Protocol. He would swim away into the deep vast ether(net) just as mysteriously as he came into her worldly web. She couldn't put her heart on these fiber optic lines.

Then why did she put herself in this position? Somehow, she had challenged herself to sing to him. She never sang aloud to anyone except herself. Sing aloud to and for a boy she had never met?! A boy she may never meet? She decided not to overthink this one and keep it straightforward. What the heck? What's there to lose? Don't overthink it. Don't plan too much. Don't stress. Don't worry that you didn't over-prepare...were all the things she mumbled to herself in silent worry in the few milliseconds before she began.

The sound of her throat-clearing jolted her out of her silence that preceded her first careful words.

She's got a pretty smile

It was out there - in the universe now. She found some of her confused confidence sheepishly snuck away behind the pitch of the next line.

It covers up the poison that she has

Did he know? Did he know all the sadness she hid behind? Could he see the weight of the burden she was choosing to carry in not being honest to herself...to him?

Now I see the burden you gave me
Is too much to carry,
Too much to bury inside

It may seem like it's easier to belt your heart out when no one's watching. But her eyes were closed as she sang every word, so it wouldn't have mattered if he were watching. She could hear his breathing through her reliable headset, and she wasn't mistaken - his breathing slowed to a heavy labored sigh followed by sigh. She didn't need him to watch her sing. He was listening with his whole body.

Could he hear her voice shake as she sang the next lines? Could he know how badly she wanted him to know how much she meant every word for him?

The song ended. She had to mute him to catch up with a swallow and a deep breath. A tear surprised her. She was holding a much bigger burden than she realized. She knew, more than ever before, in that moment, that he was the only one.

And she had no idea what in the world to do with that impossible feeling.

P.S. - Good thing she figured it out! 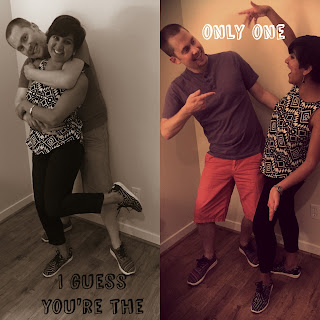