Life can feel pretty short. It is rather short. It is however, also the longest thing you'll ever experience. When I was very young, I thought you died in the order in which you were born, i.e., the oldest die first, then the young age, and so on. When I was in high school, 3 kids in my school who were younger than me died. I'm surprised it took me so long to realize how wrong I was. Anyway, today's letter is not about death or how it happens. Today, I wanted to share with you how easily and sneakily life happens. And...somethings to do when it does!

This week, Dan and I had been looking forward to (punk-) rocking out to our favorite punkrockers - Anti-Flag. We bought tickets in December for this show and though we have already seen them live 5 times, we were greedy for more Anti-Flag and treasure supporting bands like that, who stand up for what they believe in and live their principles (while of course making amazing music!) We also had tickets to fly to San Francisco tonight to see family just for the weekend. Like the concert, we planned this trip a while back too. But in the last few weeks, we had to change a lot of plans. Dan has been quite sick and after trips to the ER and hospital, we decided his recovery was critical and being at home for him to recover was essential. So we had to change plans.

In our work as teachers, Dan and I have both had to learn the art of changing plans. I don't always cherish it, but I've learned (many times the hard way too) that being flexible about a situation and its outcomes helps me grow and is the most responsive thing to do sometimes. As a person, I struggle with transitions and changes I don't see coming. As a child, unpredictability was my norm. As an adult, planned predictability became my goal. As I get older, I realize my folly in both. Life is too unpredictable to try and clasp down into a pattern. Sure, somethings should and can be reliable. But nothing, absolutely nothing (and noone), should be taken for granted. When you get older and notice that routines are malleable and structures flexible - I hope Dan and I will be able to give you more than just routine and structure (for those are important too), but also the skills to know how to create your own structures and have the flexibility and wherewithal to know when you need to shift, dismantle, create, recreate, modify, or discard a structure.

The past few weeks, life surely did happen to us. My phone reminded me today to drive to the airport at 8 to make my flight I wasn't taking and it told me what the weather would be like in San Francisco, but here I am - on our couch in our homely home in Boulder, writing this letter to the future. To you. 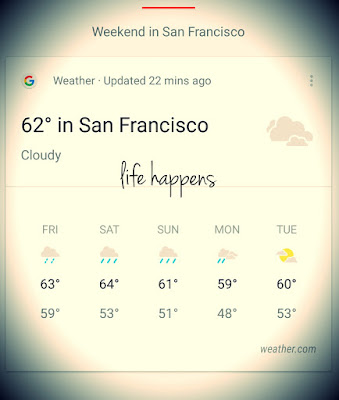